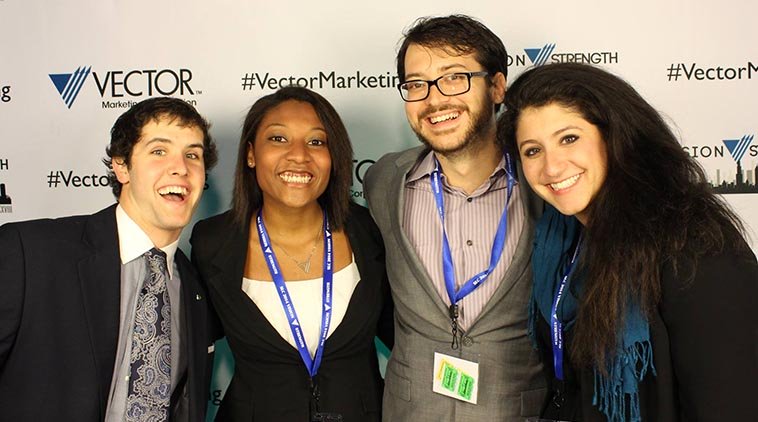 You have to go!

Ask any rep who has been to a Vector conference and they’ll tell you the same thing, “you have to go!” Brooke Peters, an Assistant Manager from York, PA, was referred to Cutco by a friend, and was lucky enough to attend a Year End Banquet conference (YEB) during her first 10 days selling Cutco.

Vector events are like adult pep rallies! They give you the emotional high of winning a championship. You get what feels like a year’s worth of learning in just a day or two. Plus, that learning could double and triple your income.

According to Brooke, the energy at her first conference was incredible and the people she met were amazing. “It’s as if the entire conference was designed to make the best better.” Brooke posted over $5,000 in sales during the push leading up to YEB, and attributes a large part of her continued success to the event.

Brooke is a huge advocate for conference attendance. It is something that she strongly encourages for new reps. “If you had the chance to travel to meet new people and to improve yourself, why not?”

But don’t just take Brooke’s word for it. Here are 3 reasons you should attend the NEXT Vector conference!

1. Learn from the Legends

Conferences are the best place to meet and learn from sales reps we sometimes refer to as “Vector Legends.” Can you imagine how much you could learn from a rep that sold $100,000, $500,000, or a MILLION DOLLARS worth of Cutco?!

These Vector Legends do exist, and they attend conferences to lead trainings, workshops, lectures, and Q&A sessions. They teach techniques that you can implement immediately to sell more Cutco. We asked frequent conference attendee Marissa Welch, from Lansing, MI, why she keeps attending conferences.

Marissa’s first time attending the Rep Development Conference (RDC) was when she got really “turnt up” with her Cutco sales. At RDC she met reps like Janet Wiggins ($1.29M in career sales) and Rob Steiner ($1.3M in career sales). “I learned from the best,” Marissa insists. By taking notes, paying attention, and practicing the lessons from RDC, Marissa transformed herself. By the end of her first summer, just 5 months after starting, she had sold over $30,000 of Cutco. She’s now over $200,000 in sales and still growing!

Since that first conference in 2008, Marissa has been to 5 more RDCs and attended other great events like Summer Conferences 1 and 2 (SC1 and SC2) and Year End Banquet. “Being at conferences will magnify your paycheck exponentially if you utilize the information that they teach you and follow through on the action steps they give you, ” Marissa says.

Conferences give you a chance to “find your why.” Most of our sales reps aren’t motivated to sell knives just to sell knives. Don’t get me wrong. Cutco is awesome. But at the end of the day, we sell knives. However, many reps are earning money or experience to fuel their dreams. New Yorker Evan Bradely-Lewis is a great example.

As a newer Vector rep, Evan had a really successful Fast Start, selling over $8,000 of Cutco in his first 10 days. Evan likes to challenge himself and embraces hard work, so it’s no surprise that he did well. But the adrenaline of the Fast Start eventually wore off. Evan found it tougher to make calls, set appointments, and create urgency like before. It wasn’t until Evan went to his first conference that he rediscovered his “why” and got back on track.

He attended the Vector Leadership Conference, where he reaffirmed his goal to produce and direct plays on Broadway. Evan’s conviction about his personal goals led to more sales, in part because he knows it will help him save money for theater school in the fall.

More importantly, Evan says, “everything [he] learned at the Leadership Conference is completely transferrable to producing, and managing people.” He says that he never would’ve gotten the opportunity to find his why doing any summer work he had before Vector.

As Zig Ziglar said, “Sometimes adversity is what you need to face in order to become successful.” For Vector reps like Krasandra Polhans from Illinios, this hits home in a big way.

Krasandra is the most passionate person about Vector conferences that you’ll ever meet. She has stories to tell you about every event she’s been to – and trust me, they’re amazing. Krasandra is charismatic, fearless, and her energy is contagious.

Her most compelling story is about her very first Summer Conference 2 (SC2) back in 2012. It was her first year working with Vector. She had been just a noob when she attended SC1 earlier that summer. Krasandra hadn’t sold enough during the push to get on stage, but committed herself to being there next time she had the chance.

Leading up to most conferences, there is a sales “push.” A push is a time to step on the gas pedal – more appointments, more sales, more momentum. The push period for SC2, meant GO TIME! Krasandra started with a massive phone blitz to set up an appointment packed schedule. She was determined to sell $10,000 during the 10 day push. BUT, While driving to a block of appointments, the hood of her car unexpectedly flew up, hit the windshield, and smashed the glass. Luckily, Krasandra avoided any serious injuries.

Thanks to her sister, Krasandra was able to use another car during most of the push until her car could be fixed. With one day left, she got her car back. On the way to another appointment, she got into another accident, this time much worse. Her car veered off the road into a ravine, causing some pretty serious injuries. She only sold $90 CPO that day before going home to rest.

The cool part of Krasandra’ story is that at no point during these accidents did she lose sight of her goal. Determined to make it on stage, she rallied on the last day of the push. She had her biggest sales day and rounded up some phone orders. She even clenched an extra $400 within the last hour of the push.

Limping from her injuries, Krasandra won her way on to the stage of top sellers. She sold $13,675, beating her own $10K goal. She took home her first trophy and $10K rock. She was proud to be the top selling female rep at the event and the only female over $10K. Looking back at all the adversity that week, Krasandra said she wouldn’t have wanted it to happen any other way. “That had a big impact on me and it’s still my favorite conference ever.”

It’s stories like these that make Vector conferences so special. So don’t miss out on one of the best opportunities that Vector has to offer. Sign up TODAY and ask your manager how you can attend all of them.