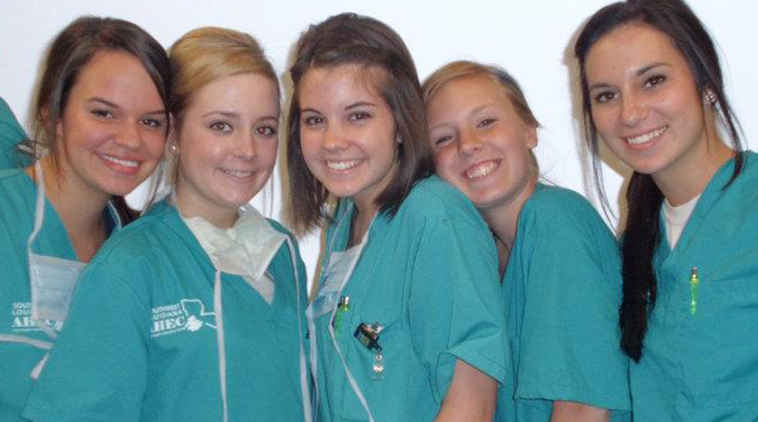 Students pursuing a degree in nursing are on track for a promising career. Nursing offers a competitive median salary, a plentitude of entry-level work opportunities, and a rewarding sense of fulfillment from helping people.

According to U.S. News, three of the Top 10 Best Jobs in 2015 are in the nursing profession.

But ask any nursing student and they will tell you that the road to a nursing career isn’t all peaches and cream. The nursing school grind requires mad studying: there’s tons of terminology, protocol for patient testing, plus anatomy and physiology to learn.

Oh yeah, and nursing students have to learn how to work with patients, too. This combo of people skills plus medical training is a lot keep up with.

We asked Courtney O’Connor, a sophomore in the nursing degree program at LSU Alexandria (LSUA) and Vector Marketing sales representative, how she has been able to balance it all. Courtney has a unique skill set that she developed while selling knives – a skill set that has helped her thrive in the LSUA nursing program.

Courtney grew up in Pine Prairie, which is centrally located in the heart of Louisiana. It’s a small, modest town with just over 1,500 people.

Courtney has a Cajun/Creole accent, the kind that makes you think of southern colonial houses, big rocking chairs and sipping lemonade on a hot, humid summer afternoon.

“I was thinking of becoming a sonographer, which is an ultrasound nurse. But during the summer after my junior year at Pine Prairie High School, I got accepted to the AHEC program.”

AHEC stands for the Area Health Education Center, a national organization focused on growing the community of healthcare professionals through local initiatives. The AHEC summer program selects just two students per high school to spend 2-3 weeks behind the scenes at hospitals and health clinics.

Through AHEC, Courtney got to shadow employees from all departments in the Savoy Medical Center in Mamou, LA. It was there that Courtney met the surgical nurses.

“They were all really fun!” she said. Despite the fact that surgery is often times a scary experience for patients, Courtney insists that the surgery area was the happiest part of the hospital, and that the sense of teamwork felt amongst the surgical nurses was inspiring.

Convinced that she would pursue a career in surgical nursing, Courtney started the application process and promptly got accepted into the nursing program at LSUA, located just 45 minutes north of home.

There are a lot of career paths in the nursing profession. RN, NP, LPN, PA, LVN, CN, CRNA, CNOR – the list of acronym-based titles goes on and on. Nursing school is the gateway to all nursing careers, and the Registered Nurse (RN) path is the most popular choice.

Students on the RN track must first receive a 2-yr Associate of Nursing (ADN) or a 4-yr Bachelor of Nursing (BSN) degree from an accredited institution.

Then, they can pursue a nursing license by taking the NCLEX-RN, which is a test administered by a state certified nursing board. Courtney is currently in a 4-yr BSN program, which sets her up for an RN license and more opportunities and more promotions over the course of her career.

While getting a degree is encouraged, there are ways to work as a professional nurse without getting an associate’s degree or a bachelor’s degree first.

Nursing schools offering this “fast track” into nursing will prepare students to be a Certified Nursing Assistant (CNA), a Licensed Practical Nurse (LPN), or a Licensed Vocational Nurse (LVN). There are tradeoffs to each path. Nursing hopefuls should consult with advisors to determine which path is best for them.

Working in Nursing and Beyond

These days, licensed nurses can find good paying work in hospitals, clinics, schools, private practices, travel nursing agencies, and beyond. While many nurses are perfectly content to work throughout their career with just a CNA, LPN, LVN or RN license, some seek to go back to school to move up the career ladder.

In some cases more school means advanced training in a specific area of medicine. This training opens up opportunities to receive a certificate of specialization or advance practice, which comes with higher pay and more control over the type of nursing you can practice.

In other cases more school means a going beyond a bachelor’s degree. These are usually 2-3 year programs, and pave the way to licensure for a more skilled position such as a Nurse Practitioner (NP), Physician’s Assistant (PA), or Doctor of Medicine (MD).

For someone like Courtney who wants to work in the operating room, she’ll have to get an additional certification beyond her bachelor’s degree and RN license.

As an RN, Courtney will be able to start nursing in urgent care and emergency room settings. But in order to be a specialist working as a Perioperative (surgical) Nurse, Courtney will need to get her Certified Nurse, Operating Room (CNOR) certification.

This is fairly common in nursing. A certification of specialization or advance practice is often required to work in a specific field of nursing.

Skills Needed for Success in Nursing

Of all the healthcare career tracks, none is as patient-centric as nursing. Nurses interact with patients every day, through a variety of activities—examining patients, recording medical histories, providing treatment, and assisting in diagnostic testing—to name a few. Getting accurate information from patients is vital to prescribing the appropriate treatment plan.

Courtney says, “medical professionals meet lots of new people all the time. It’s really important that you know how to talk to [all different kinds of] people.” Effective communication greatly impacts a nurse’s ability to help patients.

In her time around Savoy Medical Center, Courtney learned that patients might lie to you if you don’t make a connection and build trust with them first.

“[Patients] don’t trust you that much. They’re scared to tell you certain things, and might not tell you the whole truth,” Courtney warns. She says that in order to avoid this, you need to build rapport and make a connection.

When it comes to building rapport, Courtney is a superstar. She has been developing her interpersonal skills through real work experience with Vector Marketing selling Cutco Cutlery. Courtney started working for Vector in August of 2013 after a friend told her about it.

Courtney didn’t think she would be any good at sales. Luckily, Courtney’s mother encouraged her to pursue the opportunity so Courtney gave Cutco a try.

After selling over $6,000 of Cutco knives in her first 10 days, during what Vector Marketing calls the “Fast Start” period, Courtney realized that she could make a lot more money in sales than her previous jobs working at her grandmother’s restaurant and babysitting.

Her biggest goal was to save money for college. Since then, Courtney has sold over $95,000 of Cutco, won awards for sales leadership at numerous regional events, was flown out to 2 all-expenses paid trips for sales excellence, and was promoted to Assistant Manager at her local Vector office. She even sold Cutco to one of the surgeons at the Savoy Medical Center!

When asked what skills she has gained from her experience selling Cutco, Courtney says, “Lots. Really it’s confidence talking to people. I used to have a stutter because I would get so nervous.”

Nowadays she doesn’t stutter at all through her southern accent. “Also I learned management skills working as an Assistant Manager. And productivity – how to be productive while keeping a positive attitude.”

With Courtney’s mastery of what Vector often refers to as “Skills for Life,” a number of challenges associated with nursing school have become easier.

There’s a great deal of teamwork involved in nursing, which is a skill Courtney developed during her time with Vector. There’s also time management, which is a tried-and-true Vector skill that Courtney uses to be able to work and go to nursing school year round.

Talking to Courtney gives you the sense that there are good-hearted, hard working young people following their dreams. Her story also gives you confidence that trying something new can increase your potential for success.

From the AHEC program to selling knives, Courtney embodies the “life begins outside your comfort zone” spirit.

Knives and nursing skills aren’t your typical combination. We know you probably won’t learn the difference between the anterior and posterior cerebral arteries by selling knives. But you will learn powerful skills that translate surprisingly well in any career – even in the medical profession.

Girl Scouts Are Tougher Than Us: What We Can Learn from Rejection