Sales and Sushi: Are They Really That Different? 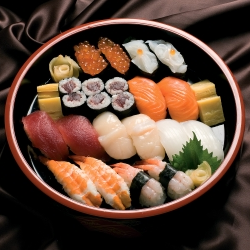 Why is “sales” such a scary word for so many? When we think of sales, it often conjures up a stereotype of a pushy, aggressive used car salesman. The salesperson is slick, and the customer is always on the losing end of the relationship, right?

I think selling is like sushi for many people. Until about 4 or 5 years ago, I’d never had sushi before because “I didn’t like it.” I had come to that conclusion of course without ever actually trying it. I mean, something that is made of raw fish and seaweed, how could I possibly enjoy it? Just the thought of the texture turned me off.

However, my good friend, Sally, convinced me to try it. Not only was it not as bad as I had made it out to be, I actually liked it. The past few years I’ve become more adventurous, ate at some exceptional sushi restaurants, and I’d go as far as saying that it’s one of my favorite foods!

If I had not let go of my preconceived notions, I would have never tried sushi and never realized how much I enjoyed it.

I think many students also have stereotypes about sales thinking, “I don’t like sales”. Yet, with sales experience they’d gain transferable skills in communication, leadership, negotiation, public speaking and time management- that they could use to propel themselves into their chosen profession, or perhaps even discover a field they never knew they had a passion for.

I studied French and biology in university, I always thought I’d be a teacher, but in the back of my mind I wondered if there was something else that I hadn’t thought of yet. That something, was certainly not sales.

I was super shy, quiet and didn’t like asking questions in class. However, the summer of 1996, I had applied for numerous positions and had yet to secure summer work. I came across Vector Marketing, and I’m so grateful that I reluctantly took that first bite! I decided to set aside those stereotypes and give it a try.

However, the truth of the matter is, I had sold before, and so have you. You’ve sold your parents on why they should once again let you borrow the car, or you’ve sold your professor on why you deserve an extension on that term paper that’s due. In fact, we’ve all been selling since we were 3 years old and sold our parents on staying up an extra 15 minutes and reading yet another story.

Selling, if done correctly, isn’t a “you versus them” scenario, where you win and they lose. Sales is meeting a need, helping to solve a problem. In today’s labor market, students need the life skills that selling teaches, more than ever before.

I just read a statistic that said, “Taking underemployment into consideration, the job prospects for bachelor’s degree holders fell last year to the lowest level in more than a decade.” (Huffington Post) Students need to find ways to separate themselves from their peers, to show prospective employers what they can bring to the table.

Whether you ultimately decide to make a career of it, as I have done with Vector Marketing or use it as a launching pad for a short time, I encourage you to at least take that first bite. I bet more often than not, it will surprise you, and you’ll like it!

Sherri Dickie is Vector’s Canadian Campus Recruiting Manager. She is a Vector Court of Honour member with over $445,000 in career sales and is currently an Employer Director on the National Board of CACEE, the Canadian Association of Career Educators and Employers. She has been with Vector since 1996.