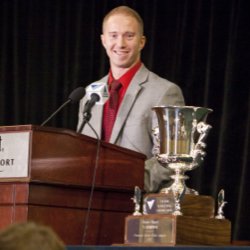 CUTCO, the largest kitchen cutlery manufacturer in North America, sells its products primarily through a national network of college students who sell through in-home personal demonstrations. The 64-year-old company manufactures its cutlery products in the western New York State city of Olean.

Adam Sobieski was also honored as a Region Record Breaker for the month of December, with personal sales of $59,352.

PJ Potter, the Western Region Manager, had this to say:

"I am honored to thank every member of the Western Region for their outstanding effort and support to Vector Marketing throughout the past year. I learn something every day from this talented, outstanding group of individuals that, together, make up not just a region within Vector Marketing, but a community. Their individual successes are a result of a larger team success and a commitment to adding value to the lives of those they touch."

Vector sales representatives usually begin as college students. Some move up the ranks as managers while others use the experience as stepping stones to other sales-oriented and entrepreneurial careers. These independent contractors learn a wide range of skills that serve them well with Vector or in other positions. These skills include:

Cutco Cutlery is a 64-year-old company with headquarters and manufacturing facilities in Olean, New York. Vector Marketing is the company’s sales division, coordinating all sales for Cutco Cutlery through a national network of college students who sell products through in-home personal demonstrations. More than 15 million US households have a Cutco product.