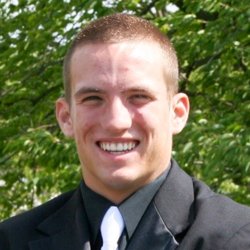 Wilmington, DE (November 21st, 2012) - Alex Dienner, of Ronks, Pennsylvania has received an All-American Scholarship for his outstanding sales achievement with Vector Marketing, the company that sells CUTCO® Cutlery. With more than 40,000 sales representatives, Dienner placed #10 nationwide for the most recent campaign. He began working with the company in July of 2010.

Dienner is a freshman at Albright College in Reading, Pennsylvania studying business management. In addition to his sales achievements, Dienner works as an assistant manager in Vector’s Lancaster office, is a member of the company’s fair and show team and is also a CUTCO Sales Professional (CSP) candidate for 2013. The CSP designation is reserved only for the most serious sales representatives who have made a career out of selling Cutco.

“I owe this whole experience to my mom. It was my mom who told me to apply for the interview. My parents have been my biggest supporters since the day I began working with Vector. Winning this scholarhsip is more about the accomplishment than it is about the money. It’s a fantastic bonus for working hard,” says Dienner.