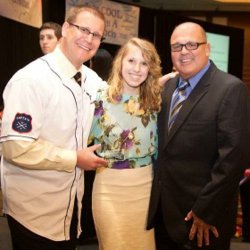 Wilmington, DE (January 16th, 2013) - Stacie Barton, of Downington, Pennsylvania has received an All-American Scholarship for her outstanding sales achievement with Vector Marketing, the company that sells CUTCO® Cutlery. With more than 40,000 sales representatives, Barton placed #49 nationwide for the most recent campaign. She began selling CUTCO® in 2011.

Barton is a sophomore at Elizabethtown College in Pennsylvania studying occupational therapy. In addition to her sales accomplishments, Barton has been working as an assistant manager in Vector’s King of Prussia office since the winter of 2011. She is working toward opening her own Vector branch office in the summer of 2013.

“Since beginning with Vector, I have matured and gained outstanding communication and time management skills that strongly influence me daily. I’ve created friendships and relationships with people in this company that I believe I’ll have for the rest of my life. Winning the All-American Scholarship shows others that I have the ability to succeed at a high level,” says Barton.