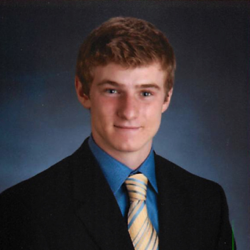 Wilmington, DE (November 7th, 2012) - William Caffery, of Winnetka, Illinois has received an All-American Scholarship for his outstanding sales achievement with Vector Marketing, the company that sells CUTCO® Cutlery. With more than 40,000 sales representatives, Caffery placed #5 nationwide for the most recent campaign. This is the 1st time he has won an All-American Scholarship with the company. He began working with the company at the beginning of the campaign in the summer of 2012.

Caffery is a freshman at the University of Denver studying business. While looking for work this past summer, he was recommended to Vector by a friend who was already selling CUTCO®. In addition to his sales achievements, Caffery is a branch manager candidate for the summer of 2013.

“Working with Vector has taught me a lot about time-management, pushing my limits and that hard work pays off. I learned to write out my schedule for the week so I could fit in as much as I wanted. When I did this, I realized I could do a lot more than I had previously thought. In addition to winning the scholarship, the highlights of my time with Vector so far have been my field sales manager (FSM) promotion, making new friends and learning about myself,” says Caffery.